A Letter to God MCQ question

The house the only one in the entire valley -sat on the crest of a low hill. From this height one could see the river and the field of ripe corn dotted with the flowers that always promised a good harvest.

The only thing the earth needed was a good downpour or at least a shower. Throughout the morning Lencho -who knew his fields intimately- had done nothing but see the sky towards the north-east.( a letter to god mcq question)

1.) Based on the detail of the house’s location, how can it best be described?

2.) The field of corn dotted with flowers means that

a) not a single flower was bigger than a dot

b) the flowers were scattered across.

d) the flowers had shrunk in size.

ans c)  the flowers were in shaped like dots.

3.) Lencho wished for a downpour or a heavy shower. Pick the option that correctly lists the correct match for kinds of rain.

4.) Which quote supports the idea in the given extract?

a) “Farming is a profession of hope.”

c) “Farming looks mighty easy when your plough is a pene thousand miles from the corn field.”

d) “Those too lazy to plough in the right season will have harvest.”

ans a) “Farming is a profession of hope.”

A Letter to God MCQ question and answer 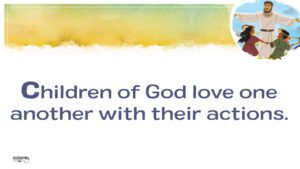 When he finished, he went to the window to buy a stamp which he licked and then affixed to the envelope with a blow of his fist. That moment the letter fell into the mailbox the postmaster went to open it.It said: “God : Of the money that I asked for,

only seventy pesos reached me. Send me the rest, since I need it very much. But don’t send it to me through the mail because the post office employees are a bunch of crooks. Lencho.”

Multiple Choice Questions based on an extract

5.) What was the most likely response that the postmas Lencho’s second letter?

ans A and D

a) details of his problems.

c) belief of being looted.

7.) Pick the most suitable quote for this extract.

b) “Real knowledge is to know the extent of one’s ignorance.”- Confucius

c) “You see a person’s true colours when you are no longer beneficial to their life.”- anonymous

What is the summary of a letter to God 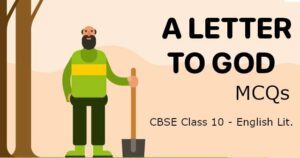 A letter to God it is a great story about faith in is written by G.L Funtes. It is a this story of faith in God. In this story, the writer G.L Funtes has depicted the faith in God of a simple poor family.

In this story (A letter to God), there is a farmer lunch lives in a small house at the top of a hill with his wife and sons. He is a poor but honest and a hardworking farmer. His crops have always been good. This time also he expects it to be good. He wishes to have a downpour or at least a shower.

It starts raining in the evening but soon the rain gets changed into hail storm and his crop of cotton gets destroyed completely. He has a great faith in God. Hence, he write a letter to God and ask him to send some money.

Decide to help lencho. He collects money from his employee and friends. He gives a part of his salary too but he is able to collect only 70 pesos. He puts it into an envelope , after few days lencho comes to collect the letter.

He is not surprised to receiving the letter but when collects the money, he gets angry, he writes another letter to God. He asks God to send him rest of the money at the same time request see him to not send it through mail.

He considers the employees of the post office as bunch of crooks who have a stolen 30 pesos out of the hundred pesos sent by the God.

What is the main idea of a letter to God ?

A letter to God is wirrten by great writer G.L Funtes.the main idea of this story is that of you strong believe in god than god will surely help you.